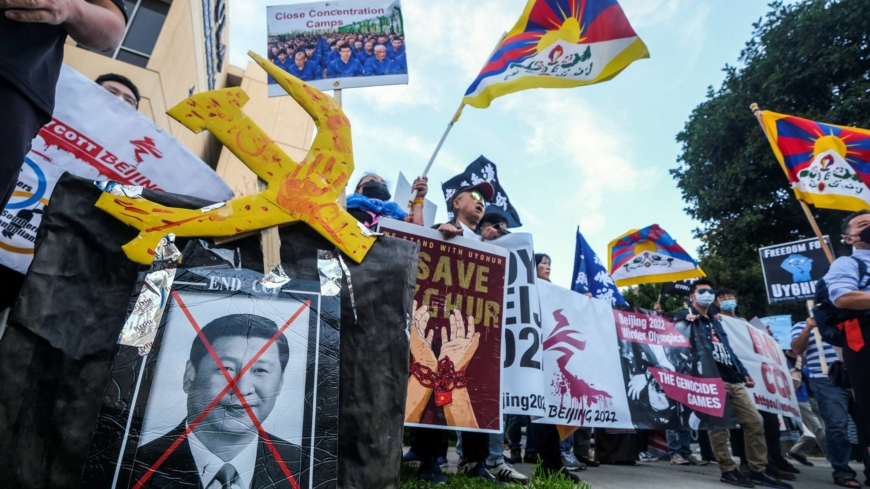 As competitions began in a Winter Olympics overshadowed by controversy over China’s record on human rights, the issue of what participants can and cannot say has loomed larger than at any Olympics in years.

The conversation at the Wukesong Sports Center veered dangerously from the growth and speed of women’s hockey toward the question of political statements at the Olympic Games. Hilary Knight, wrapping up practice before her fourth Olympic appearance for the United States, paused, glanced around and chose her words carefully.

“I think it’s important to be able to place value on things that you hold dearest to you, and it’s something that is important to me,” Knight began. Then she pivoted, saying that her priority was the American team’s opening game.

“As of now,” she said, “we’re specifically focused on Finland.”

As competitions began in a Winter Olympics overshadowed by controversy over China’s record on human rights, the issue of what participants can and cannot say has loomed larger than at any Olympics in years.

Athletes have found themselves caught between activists urging them to use their celebrity to speak out and the rules of the International Olympic Committee that restrict what they can say and where.

China’s Communist Party has also warned that athletes are subject not only to Olympic rules but also to Chinese law. The warnings have been part of a crackdown in the weeks before Friday’s opening ceremony that, critics say, has had a chilling effect on dissent inside and outside the Olympic bubble.

“Athletes need to be responsible for what they say,” Yang Yang, a senior official of the Beijing Organizing Committee and an Olympic champion, said at a news conference this week.

China’s warnings have prompted criticism outside the country, including from the State Department in Washington, but inside, the response so far has been a studied self-censorship.

Some national teams, including the United States and Canada, have warned their athletes there is potential legal jeopardy in speaking out — from both the International Olympic Committee and the Chinese judicial system.

When three skiers for Team New Zealand appeared at a news conference in Beijing on Wednesday, a spokesperson, Lewis Hampton, cut off a question about the subject of the rules on political statements. The athletes were there to talk about “performance,” he said, not protest.

Sophie Richardson, the China director at Human Rights Watch, said she had been contacted by about two dozen Olympic athletes to discuss the lack of free speech in Beijing.

“A lot of people, who have either never been to China before or who have but aren’t sure about the circumstances or the environment, have reached out with questions about what they can say or do, what they’re concerned about, what the authorities’ reactions might be,” she said.

Questions about China’s human rights record have simmered leading up to the Games, as they did before the Summer Olympics in Beijing in 2008. They seemed to take on new urgency last fall when Peng Shuai, the professional tennis player and former Olympian, accused a top political official of coercing her into a sexual relationship.

Peng’s post quickly disappeared from social media, and her whereabouts remained a mystery, prompting global outrage. T-shirts with the slogan “Where is Peng Shuai?” were briefly banned by the Australian Open last month, before officials relented and allowed spectators to wear them.

The question now is whether those shirts — or other forms of protest — will surface at the Beijing Games.

Within the Olympic community, the limits of political speech have become increasingly contested, a debate that has intensified with the Games in China, which routinely ranks among the world’s most repressive in surveys on political, religious and other freedoms.

At issue is Rule 50 of the Olympic Charter, which prohibits athletes or other participants from demonstrating or displaying “political, religious or racial propaganda” at Olympic events. A well-known case when it was invoked was during the 1968 Summer Olympics in Mexico City. American sprinters John Carlos and Tommie Smith were expelled from the Games after raising their fists on the medals podium during the playing of the U.S. national anthem.

The rule has recently been eased to allow athletes to express their views in Olympic villages and surroundings and on now-ubiquitous social media sites — but still not during competitions or medal ceremonies. The United States Olympic and Paralympic Committee went further in 2020, saying it would no longer punish athletes who participated in peaceful protests.

Thomas Bach, the International Olympic Committee president, defended the rule Thursday, saying that athletes should no more disrupt an Olympic event than a Shakespearean actor would interrupt a performance of “Hamlet” to make a political statement.

“When you engage in an event — the actor in a theater, the athlete in a Games — you have to respect the rules,” he said.

Political activism has surfaced at many international events, including the Tokyo Olympics last summer, but no other host nation has been as strict as China in policing political dissent.

The Chinese Communist Party state has crushed political freedoms in Hong Kong and Tibet and conducted a mass detention and reeducation campaign targeting Uyghur Muslims in the western region of Xinjiang that the United States has declared as genocidal.

China’s critics have called on athletes, sponsors and advertisers to speak out. Some have encouraged silent protests, such as skipping the opening ceremony.